This is the message we are taking to candidates in the General Election:

"Our aim is to ensure that everyone working or living in Lewisham receives at least the Living Wage and has a fair contract with decent employment rights and the right to join a trade union. Those unable to work or find employment should be supported by a social security system free from sanctions or ridicule. Everyone deserves a decent education and affordable accommodation.

We feel payment of the London Living Wage and fair contracts is an achievable step but we need your help. As well as campaigning for this,  we aim to engage employers big and small across the borough to address any issues that need to be resolved.

This is an issue for the General Election and beyond. Legislation will of course help.  Lewisham Trades Union Council believe positive steps can be taken now.  We look forward to working with you.

Please contact us to discuss how to make Lewisham:

Paul.Moore@cwuglc.org
Posted by Unknown at 09:34 No comments:

We were very pleased to accept the invitation from the RMT to open their Conference in Blackheath on Saturday with a brief report of our activity over the past few years, bringing things right up to date with an update of our visit to the PCS picket at the National Gallery that morning.

We are currently working on a campaign on this issue and are discussing ways to engage local employers with various people across Lewisham. We will be asking candidates standing in the General Election for their views.

UCU have arranged a meeting on Friday 20/03/15 at 6pm
in the Amersham Arms to discuss their campaign against the 25% staffing cuts recently announced by the college.  Together with a 24% cut in adult education next year, the cuts could spell the end of the college itself! Please attend and join the campaign.

There are two demonstrations to support on Saturday. SAIL are marching from Lewisham Clock Tower to Hilly Fields to protest against Prendergast plans for Acadamy status.  In Central London activists will mark UN Anti Racism Day. Both demonstrations start at 12 noon.
Posted by Unknown at 07:12 No comments:

Our first meeting of the year discussed a packed agenda and agreed that we should support a number of activities in the coming period. These include:

We also agreed that we should organise following:

·         General Election hustings meetings: we agreed we should support the hustings meeting being arranged by SELPA at Goldsmiths and arrange another meeting at the Town hall or appropriate venue in the Catford end of the borough.

·         Bromley Council De-recognition of trade unions: we agreed this was a disgraceful act and to formally write to the unions affected offering our full support in their campaign against this.

·         Living Wage/Fair contracts campaign: we agreed to pursue this with various contacts we have made.

·         Banner Theatre: we agreed the Wickham Arms gig was a success and we should try and arrange a venue where they can perform the whole show about the NHS/Save Lewisham Hospital Campaign.

·         Film show: we agreed that the showing of “Still the Enemy Within” was in was a great success and that we would arrange more film shows during the year.

Delegates reported the following from their unions:

·         NUT: planning for action in February in five local schools where academy status are being considered
·         PCS: employers stopping deduction of union subscriptions over next months, campaign to switch members to DD underway. PCS to give evidence to Work & Pensions Select Committee 21/01/15 calling for sanctions to be withdrawn from the benefit system.
Posted by Unknown at 10:15 No comments:

Still the Enemy Within

Goldsmiths UCU have arranged a screening of this film  about the 1984 Miners Strike on Thursday 15th January at 6pm in the cinema, the Richard Hoggart building

Fre entry, but we will be taking a collection for Miners Welfare fund

Banner Theatre In a Right State

Banner Theatre will be performing this show, which features the Save Lewisham Hospital campaign at the Wickham Arms, Upper Brockley Road Brockley SE4 on Saturday 29/11/14 starting at 7:30pm (to be confirmed)

The venue is open to the public so tickets will not be on sale on the door, but we ask trade unionists to make a £10 donation to the costs if they are able.   This will go to Banner Theatre (who have had all funding cut) so they can continue their work to promote trade union work around the country. 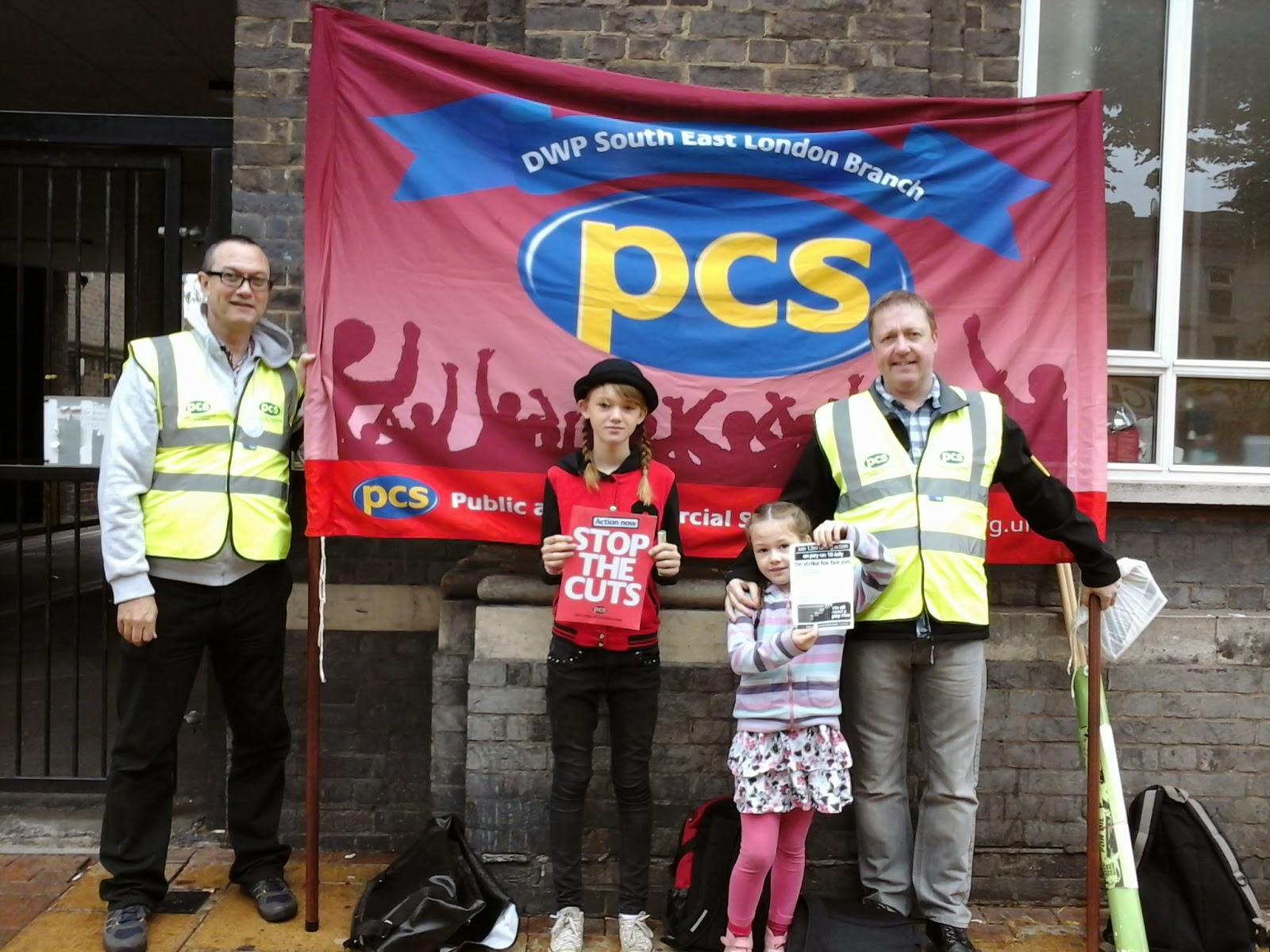